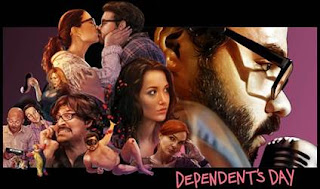 “I am touched and humbled by the generosity of these individuals, and it reinforces the remarkable collaboration that went into making this film” said Lynch. “At Columbia, I learned it's not just about artistic expression, but also about having the craftsmanship, skills and relationships to bring your vision to fruition. In something like Dependents Day, where I wore a lot of hats, that really paid off.”

Starring Joe Burke, Benita Robeldo, Shannon Lucio, and Lisa Ann Walter, "DEPENDENT’S DAY" is a hilarious, heartfelt, authentic relationship comedy about the adventures of being in love and making it work. Claimed as a 'dependent' by his successful breadwinning girlfriend Alice, Cam struggles to prove himself as he stumbles through different jobs and life's obstacles in the hopes to live out his Hollywood dream and finally rise to the occasion.

“DEPENDENT’S DAY” will premiere at Cinequest Film Festival on March 5, 2016.

For more information and to purchase tickets, please visit http://www.cinequest.org/.

Columbia College Chicago CA+S offers nearly 200 specialized undergraduate and graduate courses­­––the most diverse and comprehensive curriculum of any film school in America. Columbia College Chicago has produced Oscar, Emmy and Spirit winners and thousands of respected professionals throughout the entertainment and information industries.
Posted by the "IN" show at 11:30 AM